As Costa Mesa natives, The Growlers, ventured onto their fourth annual installment of their Beach Goth festival – we were there to bring you all the action.

If you have no idea who The Growlers are, or are wondering what the heck “Beach Goth” is… Check out this article from OC Weekly for a bit of prelude to this rather interesting festival. With such a diverse and eccentric lineup, we really did not know what to expect from Beach Goth 4 but we knew it was going to be EPIC.

We arrived early Saturday evening and toured the miniature music festival, taking place on The Observatory (Orange County, CA) grounds. What this meant, was that both the actual Observatory and the entire outside parking, lined with pinatas, vendors, and even decently sized main stage, was being used to house the event.

We first ventured to the intimate Reggae Stage and danced around in sand for a few songs. The DJ spun from a stage as big as your coffee table, while being snuggly positioned against a wall sitting in the sand. Post Reggae-boogie we made our way inside The Observatory. After venturing to the bar for a couple of hipster beers (Pabst Blue Ribbon, of course), we entered a small room where The Rocky Horror Picture Show was being projected against the wall. Just below the projection was a stage with actors acting out most of the show. It was rather interesting but extremely entertaining. It was the perfect area for those people who ended up taking a bit too many psychedelics & needed to escape the madness of the festival occurring outside. Although this wasn’t much more sane.

Further inside The Observatory, where regular shows normally take place, was the Graveyard stage.The entire room was decked out in psychedelic mushrooms and vibrant colors. Sticking to their tradition, the items looked handmade. It’s incredible to think that during the initial debut of this festival four years ago, most of the pieces were made by Nielsen and the band themselves. Once we got a good feel of the indoor stages, we frolicked over to the main stage, appropriately named Beach Goth! 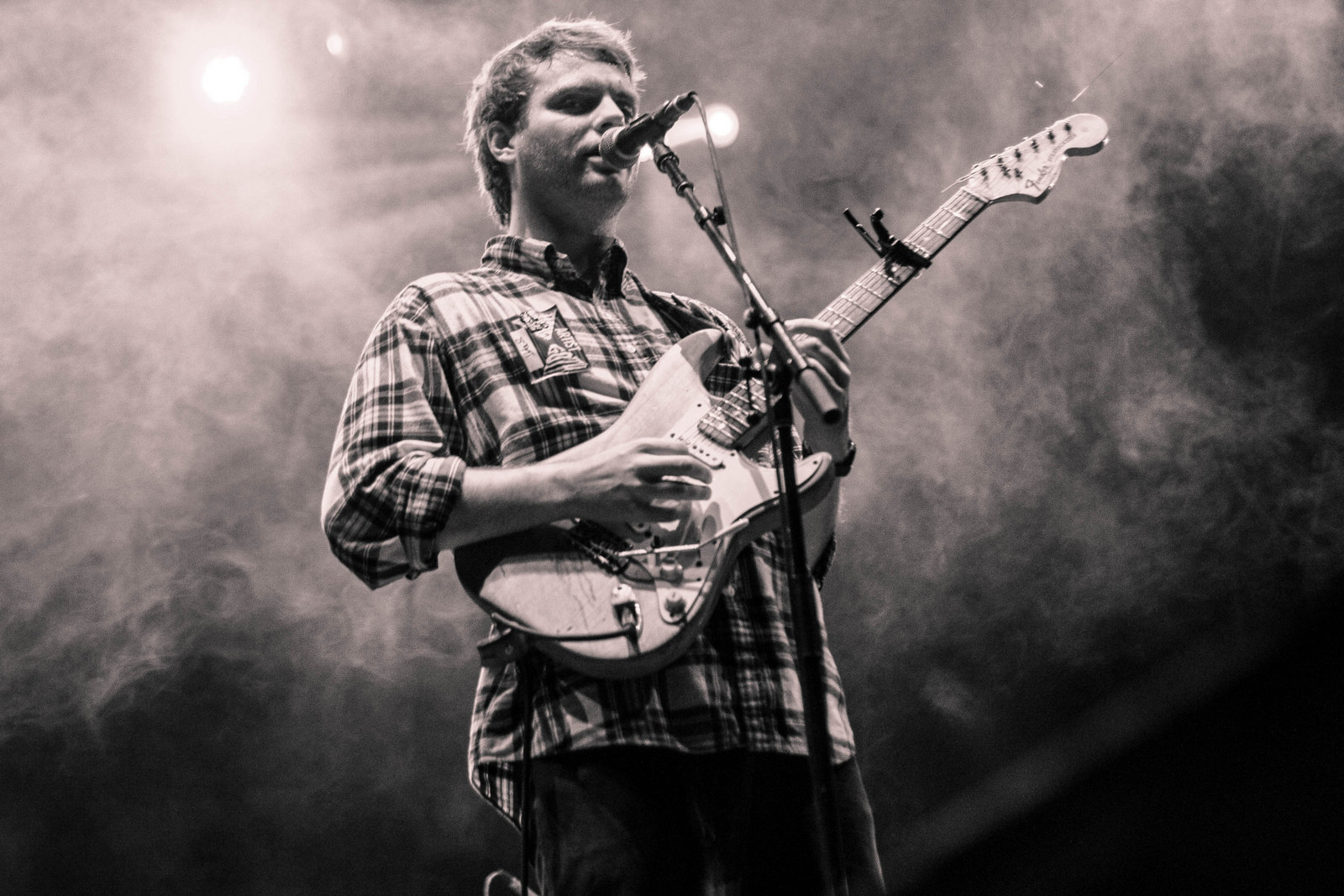 We arrived to the Beach Goth stage as Mac Demarco and his band took their positions. We’d seen Mac Demarco once before whilst covering Coachella and were very excited to see them again. Their set was upbeat and fun. I personally think they sound better live than their recordings. During the end of their set, Mac yelled out, “If people around you don’t want to be pushed, then don’t push them.” We weren’t close up to the main stage, as we were indulging in the finest of $7 frozen hamburger patties with slices of Kraft cheese on them, but clearly the crowd must have gotten pretty rowdy. 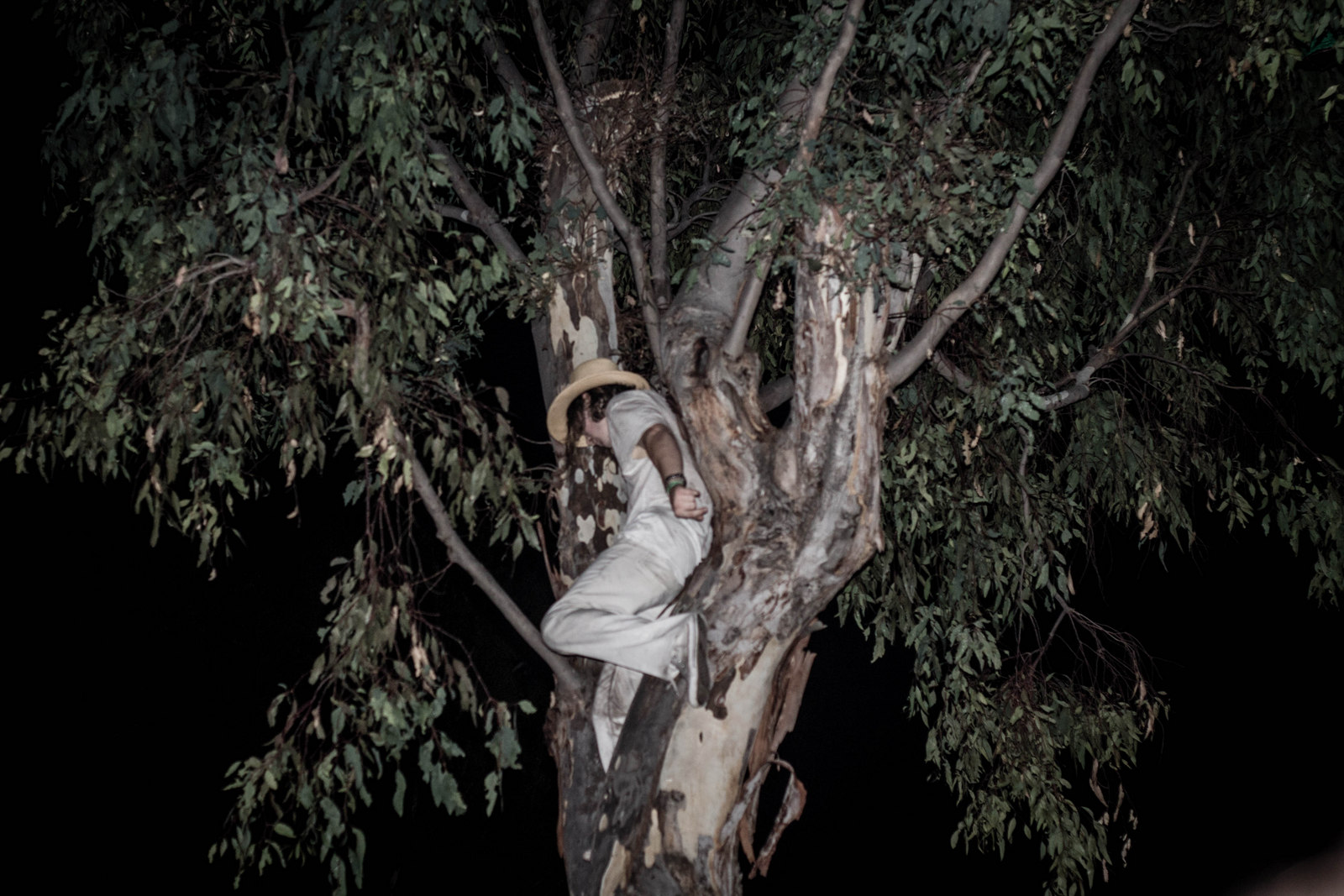 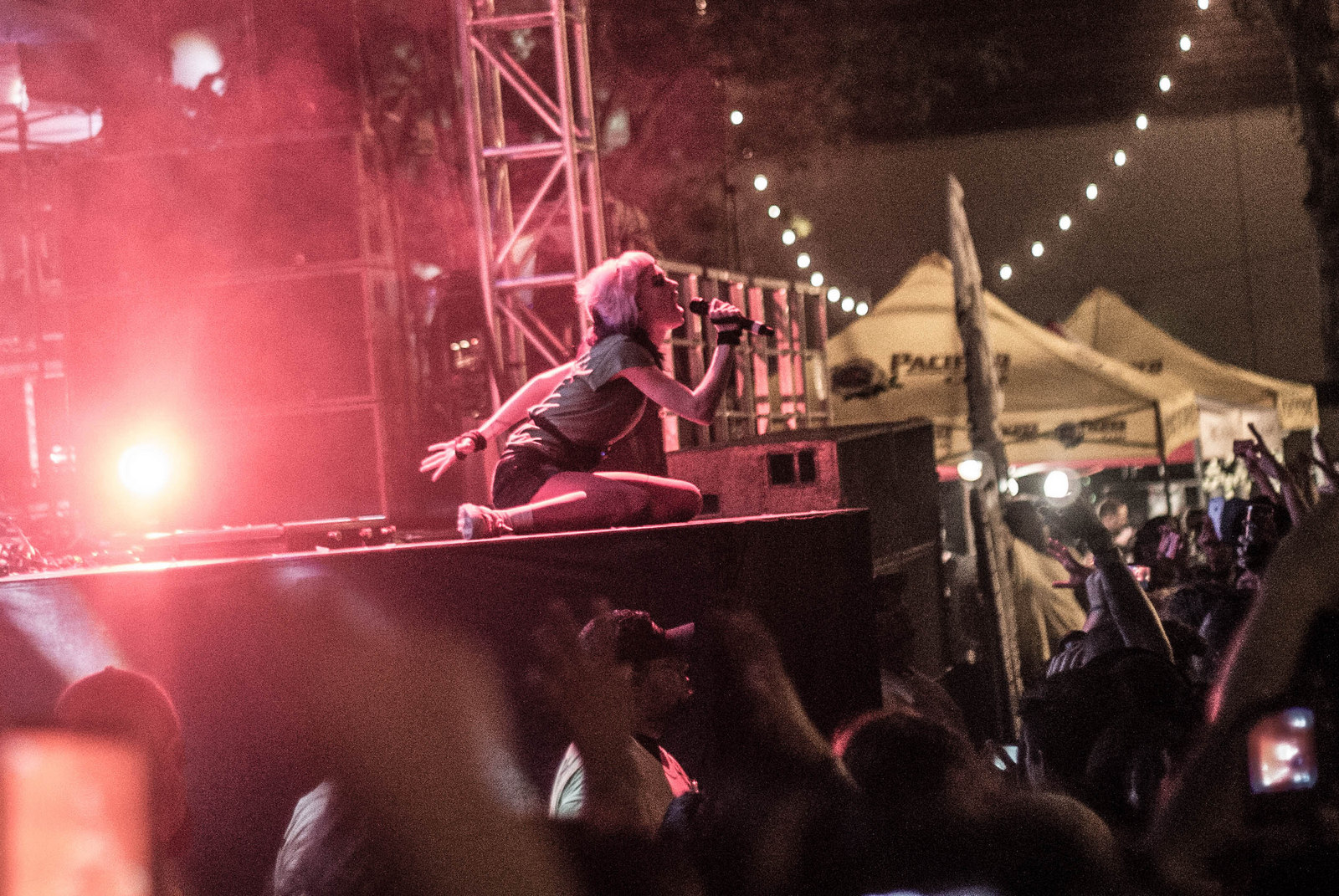 After Mac Demarco, we waded our way up to the middle of the main stage in order to secure a prime spot for Grimes. While we were waiting, we saw a guy literally climb up a tree and post up on a branch. The crowd cheered him on as he ventured up the tree as security guards promptly intervened and made him climb down. As the stage filled with smoke, Grimes emerged, complete with various female dancers rocking flight suits. Dressed in army attire, they looked great but had nothing on Grimes swag. Her hair was dyed 3 different colors, come on! She opened with a new track then ensued to playing songs from her Visions album. Musing over Grimes from her confidence and eccentric style, her true colors showed during her wild performance. The entire crowd seemed to be immersed in her set as she closed out with some new songs including “Flesh without Blood/Life in a Vivid Dream” from her upcoming album, Art Angels. Everyone was absolutely thrilled to hear a couple new tracks. Her set was easily one of the most energetic sets we saw all weekend.

It was time for our final set of the night! I have seen The Growlers live twice before Beach Goth and I couldn’t wait to see what their “back to back sets with no repeats” was going to be like. As we all know, The Growlers love dressing up, so naturally they walked out on stage in full Skeleton costumes complete with full-on face paint – it was perfect. Opening up with “Big Toe” they immediately had the crowd grooving away. Their Saturday set was a great mix of their older and newer songs. A few favorites were “Humdrums Blues” and “Love Test.” The Growlers definitely have their own unique genre that features a bit of the surfer punk-rock style mixed with psychedelic vibes. My correspondent and I feel as though, this unique genre along with their DGAF attitude really gives the band the immense following they have. At the end of their set, they left everyone wanting more!

While we made our way out of the festival after day one, we couldn’t help but laugh at the pinatas that lined the festival. Complete with marijuana leaves, pills, beach balls and cactuses – they were clearly trying to make a statement. They even had a tent, where you good purchase said pinatas. Thank you Orange County.

As day two began, we spend most of the day inside our Newport Beach abode. The sun wasn’t out and neither were we. It probably didn’t help we’d spend most of day one drinking margaritas & throwing back Jack Daniels. We did know that we didn’t want to miss the Allah Las, and so we made it a point to arrive in all due haste for their set.

I absolutely love the Allah-Las, given they really portray a similar genre to The Growlers. They were playing on the Graveyard Stage (inside The Observatory) and it was literally packed like a can of sardines (forgive my usage of the old expression). All the walkways were filled with a crowd both young and old trying to get a glimpse at the stage. Once we made it to somewhat close to where we could hear music, we really couldn’t see a thing and we’re getting pushed around by the crowd. That being said, Sam, covering the show with me is easily six feet tall.

The band appropriately opened with “Tell Me What’s on Your Mind” but we only stayed for three songs and made our way to the main stage. The Allah-Las sounded phenomenal but the crowd was overwhelming. Given the fact that security did nothing in regards to keeping walk-ways clear, it made it extremely difficult to maneuver our way around to a better view.

To describe this performance with only words is hard, as Yolandi & Ninja (Die Antwoord) are more of a spectacle than anything else. In only one hour, their performance featured almost five wardrobe changes, unmatchable energy from the duo, completely NSFW visuals with aliens & dildos and even a nice view of Ninja’s ass. Making their appearance in matching baggy hoodies and track pants, both Ninja & Yolandi quickly shed the upper portions of their outfits and hit us with their almost unintelligible lyrics present in most their songs. During the peak of their set, Ninja brought out the duo’s daughter, Sixteen Jones, as they took an “commercial break”. Jones danced to an entire song, solo. Ninja & Yolandi promptly returned for a few more tracks, changed again for their encore and then left us with a high pitched “Bye-Bye”. You really have to see it to believe it.

After a phenomenal first day performance, I knew Los Growlers were going to be just as wild and awesome for their second set! Before taking the stage, we were graced with a brief interlude from West Coast Rapper Warren G. It was an unexpected but much needed Hip-Hop break for some, while others seemed a bit unhappy.

As the production crew finally moved out, The Growlers walked on stage. They were all wearing shiny silver outfits and I from our appropriately lodged spot in the beer garden I really couldn’t decipher what they were dressed up as. Initially I thought they were wearing some sort of futuristic Disco outfits but once I got a better look, I realized they were all dressed as Tin Men (face-paint & all). Ahh Brook’s so original!

They opened up with one of their newer songs, “Going Gets Tough.” Just like their first performance, their set included a wonderful mixture of the newer and older songs and even a few covers. “Strange Days” by The Doors was one of my favorites. They closed out with “Chinese Fountain” and had four huge disco balls beaming. The Growlers thanked us for coming out and then walked off stage. After about five minutes of the classic “One More Song…” chant, the band came back on stage for the encore. The lead vocalist Brooks said, “We promised two sets with no repeats, but both those sets are over so what do you want to listen to again?” After jumping into the crowd for song requests, the band decided to play “Sea Lion Goth Blues”. Giving us an extra 20 minutes, the band had closed out with “Love Test.” Nielsen and his band truly left everyone in awe!

Given the sheer magnitude of the festival in such a small location, we’d imagine The Growlers may have to make the move to another location. Although Nielsen has expressed his disinterest in doing this, it’ll only pan out better in the long run. With some minor improvements like more grass and areas to sit down, Beach Goth 2016 is sure going to be a fun one. We look forward to seeing everyone there and truly can’t imagine the lineup they will bring us next year!